Skip to content
At this time of year, it seems appropriate to share a ‘getting to know you’ activity. I came across this quickfire interview (for want of a better word) with the singer Emmy the Great in the (occasionally NSFW) music magazine The Stool Pigeon: 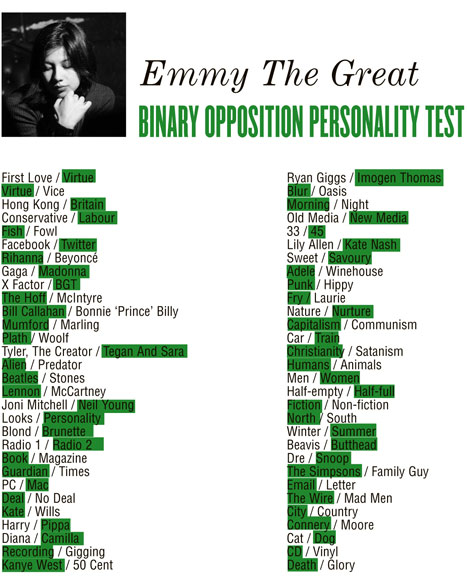 I thought it would make an interesting way to introduce yourself and the students to each other at the beginning of a new class. Obviously, you need to make your own (I dream of having a class where I can discuss the relative merits of Bonnie ‘Prince’ Billy vs Bill Callahan!), but I think it’s easily adaptable for any type of class.

Here’s how I’d use it in my classes:

1) Give the students the following on a handout: 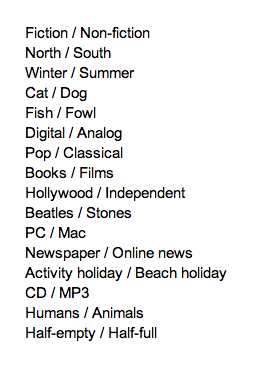 4) Get feedback and discuss any new vocabulary as a class. Make sure that you don’t give anything away about your own personality at this point.

5) Now ask them to individually take the personality test, highlighting or underlining the choice they think best reflects their personality.

6) Once they tests are complete, ask them to compare their answers with their partners and discuss their similarities and differences.

7) As a class, get some feedback from the pairs. Ask them to share some of the similarities and differences they found.
8) Ask everyone to stand up. Tell them that you are going to divide the class into two groups, so we can find out more about each other. Choose one of the lines from the test and divide the class into two groups by the preference. For example, you could ask the ‘cat people’ to stand on the left and the ‘dog people’ on the right. Put them into smaller groups if there are too many people on one side, and ask them to discuss why they chose cats over dogs or vice versa.

9) Do this three or four times with different lines from the test.

10) To sum up, ask the class if there was anyone who was in the same group every time, or 3 times.

Note: There’s a danger that this part could become too teacher centred (“Now it’s your chance to learn alllllll about me…”), but I think this can be avoided by not spending too much time on it and by doing the activity after they’ve had the chance to speak to each other first. You’ve already shown them that they are the priority. It’s also worth remembering that the students really do want to learn about you, so I think in this early class you can be a bit more egocentric than usual.

10 thoughts on “Getting to know you activity: personality test”